Here's How to Lock WhatsApp Using Face and Fingerprint

Here's How to Lock WhatsApp Using Face and Fingerprint.How to lock WhatsApp using faces and fingerprints. Photo: Net / Ist
Technology News,  - Finally, there is a way to lock WhatsApp using faces and fingerprints. This was previously only limited to rumors spread on the internet. Rumors about the latest biometric feature for WhatsApp users have been circulating since the end of 2018. Whatsapp then officially launched this biometric feature for its users, although it is still in the form of a beta tester. 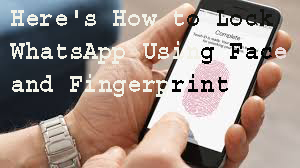 Before activating this feature, you must first update the WhatsApp application in the latest version. So you who use an iOS device can update WhatsApp to version 2.19.20.19 through the App Store. This WhatsApp version 2.19.20.19 update measures 137.7MB and is compatible with iPhone models running iOS 8.0 or higher.

How to lock WhatsApp using your face and fingerprint, first thing you have to do after updating the application is to first activate this feature on the WhatsApp Privacy menu. You can simply access the Settings menu (settings), then you select Account (account), and finally you select Privacy (privacy).
On the Privacy page, you just select the Screen Lock menu or Lock Screen. On the Screen Lock screen, you will be presented with the option to activate the Face ID or Touch ID feature, depending on the features on the device you are using. Then you enable toggle Require Face ID or Require

One interesting thing about this feature, although this feature is protected by biometric technology, but if you are lazy to open WhastApp, you can reply to messages or answer WhatsApp phones from the Lock Screen notification.

Wow, isn't it interesting? How to lock WhatsApp by using face and fingerprint so this can only be done through the iOS platform, but for you Android users don't worry. As quoted from PhoneArena, a biometric feature that allows users to lock WhatsApp with fingerprint is also being developed for the Android version of WhatsApp.

That was the tutorial Here's How to Lock WhatsApp Using Face and Fingerprint.